Coupang, The most paid E-Commerce in Korea 2022

In the first quarter of 2022, Coupang became the most paid e-commerce service in South Korea, surpassing Naver for the first time. Even if it was a small victory, it is a big inflection point for Coupang, which was considered a Startup 10 years ago.


The results were made public on April 12th in Wiseapp, a real-time data-based Market Intelligence service company. According to Wiseapp, which collects payment and sales volume data from retailers, Korean internet users spent 9,622.6 billion dollars on Coupang from January to March of this year. This figure only includes payments made with credit, debit cards, and account transfers. Corporate cards, corporate account transfers, and intercompany transactions were not counted.


The third company listed after Coupang and Naver was Shinsegae, followed by Baedal Minjok and Auction. 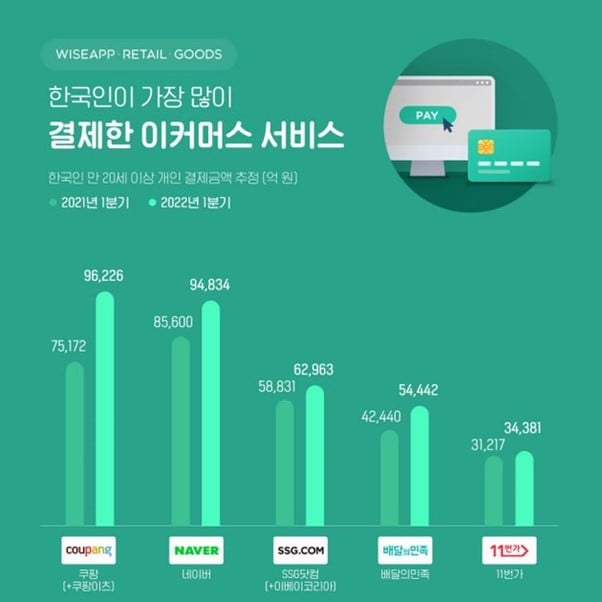 The trends in the distribution industry predict that Coupang will continue to expand in the following years, and it is actively investing in logistic centers to consolidate its image as the “Next-day delivery” company.


On the other side, Naver’s revenue mainly comes from Naver Store, Naver Webtoon, and Music.


As InterAd has commented in previous years, the online shopping trend has been thriving since the beginning of Covid-19, having even a bigger impact with the spread of the Omicron variant. According to Yonhap, online shopping in the country rose 13.7% on year in February, led by the demand for food delivery services, electronics goods, and travel services.