Why influencer marketing is so popular in South Korea?


Influencer marketing is nothing new in South Korea since Koreans are fashion-forward and have a trend following mentality. Actually, the country is placed in the top 2 of social networking globally (38.4 million people out of 52 million are active users on social networks).


71% of Korean consumers are more likely to purchase based on a social media reference and 86% of women browse on SNS before making a purchase. As for 2020, the influencer market in South Korea has grown up to $10 million according to KOTRA. They also affirmed that the market is getting bigger because Millennials and Z generations spend huge amounts on online shopping.


The most frequently used social media in South Korea are Youtube, KakaoTalk, and Facebook. However, Facebook and KakaoTalk marketing is usually done through branded content rather than individual influencers. If you are looking for a content creator to help your brand to get better awareness, is better to put the focus on these platforms:


As of June 2020, the celebrities with the most followers on Instagram were: 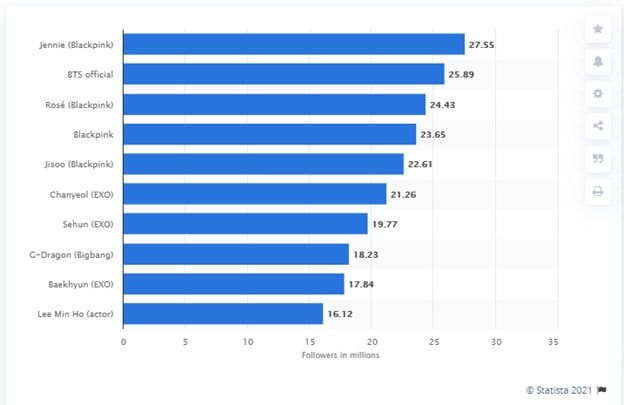 
However, this list is mostly integrated by idols and actors, which are quite difficult to reach for most brands and companies. We have curated a list of Korean non-idol influencers, mainly focused on fashion and beauty that you can follow or contact for collaboration.

A fashion influencer with a casual style followed mainly by young females. Kim Ewha has developed a cute and joyful personal brand and currently runs a female clothing brand company with her sister.

Park Sora is a Stylenanda and 3CE ambassador, and a popular face in the Korean influencer community. She has a feminine chic style and prefers wearing monotone clothes.

@suminzz
Followers: 595k
Another popular fashion and lifestyle influencer, who also owns her own fashion store in Café 24.

Followers: 744k
Korean model based in Seoul. She posts about beauty, travel, and lifestyle. Se also has a YouTube channel where she uploads videos on a monthly basis. @ireneisgood
Followers: 1.9M
Irene is a popular model and Korean American instagrammer that travels de world from fashion show to fashion show. She is girly, has a fun style and has no fear to experiment.

@94_j.a
Followers: 509K
Jeong-ah Kim has a young and playful style and amazing makeup skills that make her look like a doll. She has a strong preference for pastel tones and beauty products.

@euddeume_
Followers: 429K
Pilates instructor and YouTube creator, Eudeum Shim helps you to have a better lifestyle and look great along the way.


Tips for your influencer campaign


Many Korean influencers, especially on Instagram can be approached directly or through influencer marketing platforms. In them, you can search for influencers depending on their age, gender, number of followers, and posting categories. When you start looking for an influencer for your brand, keep in mind some tips to succeed in your election: